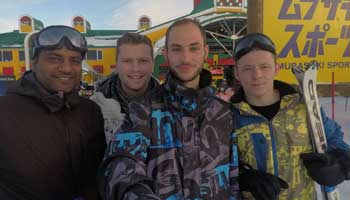 This year I have been extremely fortunate to visit Japan on an 8 month assignment as part of my graduate training programme with DENSO. For the first 3 months I was joined by colleagues from Europe and America.

When first arriving in Nagoya, Japan we were surprised and delighted to see snow in the city centre. After that it took only two weeks before we decided to make the most of the perfect winter conditions and go skiing nearby.

One of the closest resorts was Takasu in Gifu Prefecture. This was easily accessible from Nagoya by car and took around 2 hours each way. It was a small resort by European standards and consisted of short quick pisted runs with some opportunity to cut between though the trees (although this is frowned upon in Japan). The resort and conditions were well suited to beginner to intermediate skiers and snowboarders.

This was a single day of skiing so yet again I was only able to record a limited amount of footage (also due to GoPro battery). Throughout the day I practiced keeping a moving target in shot with varying degrees of success. To keep the video interesting I have tried to film from a variety of angles including my ski boot.

The use of video for story telling is compelling. In this instance I filmed without much of an idea of what I wanted the final story and video to look. In the future I would like to make a short plan beforehand and capture more varied footage.